The research we have suggests that deep engagement in rich mathematical tasks and student collaboration are keys to promoting learning in mathematics classrooms. For most of the semester, I have been using student presentations to the whole class as the means to engagement and collaboration. However, I have found that it sometimes becomes necessary to adjust the classroom organization. One reason is that running with just one format can become stale over the course of the semester. Also, certain students become comfortable sitting passively in presentations, even though I try to keep them involved. I also find that as the instructor, I sometimes get weary of one routine. In addition, students’ energy levels wane as their workload increases with the end of the semester looming.

So, I have been mixing it up with a technique I learned as Expert-Home Groups, but it is essentially a Jigsaw. Here’s how I use it:

I assign 2, 3, or 4 problems to the class. For purposes of this example, let us assume two problems have been assigned, #1 and #2.

Divide the room into groups. The number of members in each group is not too important, but usually 4 is the maximum number in a group if they are all going to contribute productively to a discussion. For purposes of illustration, let’s say there are 8 groups, which I will label 1, 2, 3, 4, 5, 6, 7, and 8. Further assume that each group has 4 people. 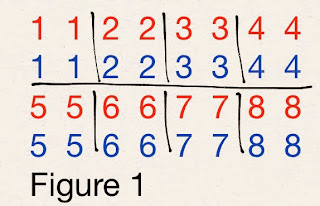 In the new groups, each problem is explained in turn, until everyone is satisfied that the problems are solved. 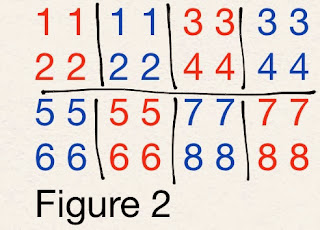 Tips for making this work:

Assessment:
This is a great way to liven up the classroom and use a little movement to shake things up. If you have opinions on this, or other ways to get small groups actively engaged, I'd love to hear from you.